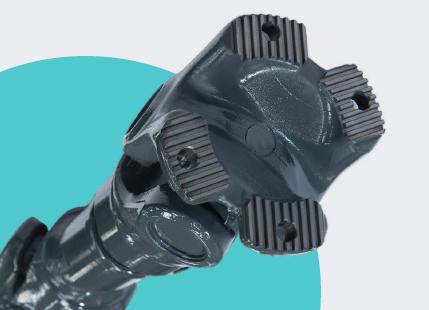 Universal Joints (UJ’s) tend to be the weakest point in any propshaft so it’s likely that at some point they will require repair or replacement. However, if a Universal Joint is greased regularly, it can prevent it from becoming dry as grease evaporates or is lost. The lack of lubrication can cause friction between the universal joint bearing and the propshaft; the bearing within each universal joint twists a small amount with each rotation of the propshaft.

This friction will initially manifest itself in a squeak, which is unlikely to be heard. If unattended, this squeak will then develop into a vibration that means the universal joint bearings are so worn that they allow the propshaft to move outside its normal rotational path. Once this vibration occurs, it can cause damage to the whole propshaft. The vehicle should be assessed by a professional garage, and the universal joint will need to be replaced if it is found to be badly worn.

If you think you have an issue with a vibration on your vehicle, you can bring your vehicle to us, we will have it assessed by a local garage, and repair the propshaft if the UJ’s have failed.

We carry thousands of Universal Joints in stock for many propshaft applications and can normally repair or replace universal joints within 24 to 48 hours of receipt of the propshaft. We can also arrange for courier collection and return of the shaft too.

With over 100 years combined experience you can be assured the advice given will be precise and valuable.

As one of the largest stockholders of complete propshafts and component parts we can ensure you are operational in the shortest possible time while reducing additional shipping costs.

We offer a same day service ensuring you have minimal downtime and reduce the cost associated with replacement vehicles or plant.

A nationwide service, providing high quality propshafts and expert advice to both individuals and businesses.

In week 10, we took a quick look at our first propshaft centre bearing of the series. We covered the main components of a centre bearing and how they operate within a propshaft.

Universal Joints are a common sight when it comes to Propshafts and are easily identifiable by many people in the automotive trade. However, if you’re someone who has limited experience with Propshafts, let alone the individual components, sometimes it can feel like you’re fumbling around in the dark.

Volkswagen’s mid-size luxury SUV, the Volkswagen Touareg, has been produced since 2002 and its popularity seems to suggest it’s following the sales trend for SUVs across Europe.

Scania Interaxle Propshafts (or “Bogie Propshafts”) are found on Scania tippers between the two back driven axles. It is quite common for these to fail due to the amount of stress they are under, so we quite often see these props in pretty bad shape.

Request a call back